Decades and so on

Anyone else notices that the phrase 'Noughties' to describe the decade we are currently in and soon to leave was first mentioned around the turn of the century and has been dutifully avoided and replaced with the phrase, 'er... The Decade We Are Currently In' until the last few weeks when it has been become 'necessary' to use it in cheap hack pieces about the last 10 years?

Upon arrival, please leave your sanity at the door...

So I have arrived in the land of smells and heat and people looking at you funny. It feels like coming home, in an odd way. There's so much I love about this country. However, before I eulogise, a few whimsical observations.

As we taxied around Chhatrapati Shivaji airport, to our stand, a man across the aisle from me was fiddling with his mobile. I figured that he was changing the time in flight safe mode, something I had done previously. Nothing untoward there, I supposed. Sat in front of him were the two attendants for our cabin, waiting to be able to get up and do that Doors to Manual & Cross Check thing. Then he received a text. How do I know this, you might ask? His phone, at the loudest possible volume, beeped out SMS in morse code.

If you going to be a bit of a numpty, do it subtly, at least.

I was standing in the line for passport control, and, as is the wont of Indians, there wasn't really a line. It was about three abreast, with a wheelchair or two thrown in for good measure. There was an elderly looking Indian gentleman behind me, with his wife vying for my place in the queue. Now, had they asked, I probably would have let them go - I'm a genial kind of chap. However, the intention was clearly not to ask, but to jostle. Thankfully, the inspector beckoned me first. I felt I had the moral victory. But really, the question has to be asked - the British spent far too many years here, presuming that our imperial rule was justified by our generous sharing of architecture and engineering. And in all that time we, the British, didn't teach them how to queue?

A trick missed, I feel.

There are a few other things which I noticed/found amusing. But then, I'm here two weeks. I'll leave you dangling.

There are so many things...

I just don't know what to say. And as this is a blog, that becomes worthy of note. I'm not sure why, though.

Just cut myself opening a present that my friend got me for Christmas. I cut myself on that stupidly tough plastic that surrounds, well, everything now. However, there is a certain irony in the whole thing, in that the present was as penknife.
Posted by David at 14:14 1 comment:

It is snowing. I love it. I never want it to stop. It's one of my favourite sensations in the world, and I am always disappointed when it comes to an end. So, snow, just don't stop.

I'm swiftly approaching my 200th post. Any suggestions for this milestone-like undertaking? All will be read, and most will be dismissed, so make it good.
Posted by David at 16:17 8 comments:

I've just gone through all those blogs that I haven't read in a couple of days. And, due to the fact that all my friends are brilliant, I feel about as creative as a inert bit of slime. However, as I am very aware that this is a completely selfish ploy of my brain, and a bizarre lack of self-confidence, I'm going to find a photo that I took and post it. Maybe two. Then I'll feel better, because I entirely rely on doing things and feeling good about them, as opposed to understanding that my God has got my back. 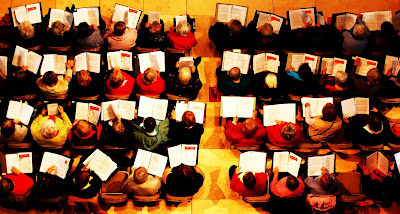 The Southwell WI choir practice, taken from the loft above the Nave. I reckon it's a good 30-40 metre drop. I enjoyed the challenge. Thanks to Lizzie for getting me up there.

This is my church, where I work, in the snow and sun this morning. I like.
Posted by David at 15:40 5 comments:

Brilliant piece of design and engineering. It's a wonder no-one thought of that before.

I was pleased to see that, for some unknown reason, I have a reader in Hanoi. I hope you enjoyed your brief foray on my blog, whoever you are.

Whatever I can do for East-West relations.
Posted by David at 09:53 1 comment:

This blog is basically some thoughts I've had over the last week and, a bit like a volcanoe erupting, I shall now spew forth. Although, there will be considerably less lava, and a few more words. Otherwise, the comparison is pretty much ideal.

I was sitting in a well known train station eating slowly cooling food from a well known artery blocking establishment and reading the Evening Standard. I had a lot of time on my hands, so I pretty much read every article in there, and came across these delightful collection of words:

Mr Balls [Minister for Education] and wife Yvette Cooper [Minster for Don'tknowanddon'tcare] are the first married couple to serve as Cabinet ministers. He went on: “I think marriage is important."

Question for you, Mr Balls. Does your wife agree with your views on marriage, and is that why she took your name?

Same paper, another article. I wonder that if I make a habit of reading the Standard and finding humour in it, I might just have things to write about far more regularly.

The article was about the 'failing' state of the capital's primary schools. It set out some of the standards the children were supposed to reach at different levels. Children who reach Level 4, for instance, 'can “read between the lines”, use commas to break up long sentences, and “get the point” of a story or poem.'

Out of those things, "getting to the point" seems quite key. General comprehension of stories and poems is fairly essentially if you're going to read stories and poems. And then, they drop this bombshell, which I think I will let do it's own legwork:

London schools minister Diana Johnson said children who fall short of Level 4 were not “lost” and could still read “and enjoy” Harry Potter books, for example.

From the ridiculous to the more ridiculous without a hint of sublime at all. In fact, the downright worrying would be more appropriate. I read yesterday of an initiative by a northern Italian town called 'White Christmas'. A suitably apt title for a seasonal event, you may think. However, the seasonal event in question is officials from the right-wing local government 'to identify and expel as many non-Europeans as possible.'

Not only is this worrying in the first instance, but for the precedents it might set. However, worst of all, the defence of such a move from Claudio Abiendi, the xenophobe apparently in charge of security in the town, follows thus:

"For me Christmas isn't the holiday of hospitality, but rather that of the Christian tradition and of our identity."

I'm tempted to go into the finer points of just how wrong that is, but all I think I shall do is mention the cold, winter night where a heavily pregnant teenager turned up in a town where there may have been no room, but they certainly found some. How's that for 'Christian tradition', Mr Abiendi?
Posted by David at 23:12 1 comment: