I am a product of my culture.

There, I said it.

I am a postmodern, relativistic, liberal, tolerant, individualistic person.

There, I said that, too.

And I'm not sure I like it. Whilst some of those things are viewed in society as good, even noble, I'm becoming increasingly aware of my individualistic stance, and my poor understanding of communion. For instance, I hate crowds. I hate being at a gig, knowing that others there know the band or the songs just as well or better than me. I want to be different, to stand out, to justifiably think I'm better than everyone else. Why? Because my culture dictates that I have to be an individual, to be able to stand alone, because to be part of a crowd is not to think for myself.

In reading a book yesterday for revision, I read, and hopefully understood, that we can only truly 'be' when we're in communion. We are are defined by those around us, that I already knew. Yet I think it's high time that I stopped assuming that definition was necessarily a bad one, and started embracing communion.

A wonderful, if rather simple truth occurred to me, yesterday. I was revising the Systematics of Edward Irving, and came across this fact, as written by our very own Graham:

'Jesus had to have exactly the same kind of humanity as ours if he were to save it and make it possible for us to change. His, like ours, was fallen. It had no inherent perfection. On its own it was destined for corruption.'

In other words, Jesus was sinful, and sinless. Astonishing.

Was perusing the BBC News website, as one does, and came across this article, which was of note for two reasons:

a) The official who gave the press statement claimed that '[the bombers] were hired by America and the agents of arrogance.' Either he's using alliteration as a rhetorical effect, or a little known hair metal band from the 80's are funding political and religious warfare.*
b) The article did what I just did, and hyperlinked/crowbarred another article in with the purpose of you clicking on it. It's commonly used on blogs the world over, but on the biggest and best news site on the internet? I'm unsure of how I feel? Empowered to read further on the issue, or raped of my own news sourcing.

Or maybe I just shouldn't care that much.

I was walking through the woods during my two hour walk this morning to find one of my favourite spots, a copse of trees with very little vegetation on the ground around them. The leaves form a lovely brown carpet, and when the sun is shining, the light falls in a very particular and beautiful way through the trees.

In trying to find this spot, I wandered through the woods for quite some time, and while I did, the clouds covered the sun. Inevitably, I was disappointed. After some meandering, I found the right path, and the moment I emerged into the clearing, the sun came out. Brilliant light hit the trees, and shadows danced on the floor through the canopy.

It's the small things.

*Disclaimer: Not entirely true. In fact, it's mostly made up. Like, the bit about the band, and the warfare. Don't know about America. Wouldn't want to embroiled in a lawsuit.
Posted by David at 11:42 1 comment:

So, my club virginity was stolen last night

I say 'stolen', like it was whisked away from me in something of a frenzied attack. Whereas, in fact, I voluntarily walked into this club in London, apparently renowned for the large number of sexual assaults that occur there, and is under threat of closing down due to the above fact.

So, you walk in a fairly inconspicuous looking door, and find yourself in a well-lit vault. You walk further, and find you are not - you then have to walk about 200 metres down a corridor of vaults that have little or no lighting, and explain fairly well the above reasons for closure. You are then ushered round to the right, arriving in what I can only describe as a hippy cafe set in the vaults under London Bridge with pounding music - chairs, tables, all mismatched, and tankards with tealights.

There was an art installation to the right which had a screen projecting a set of images, which took about a minutes to scroll through, and infront of that screen were balloons filled with helium, with bits of card attached, printed on them were those short adverts that read like this, or similar: 'You were the girl with the blonde hair and pink scarf. We smiled at each other at Cockfosters tube station. I'm fairly sure you fancy me. Drink sometime?'

Other art installations included a guy who was giving people a chance to talk about their grandparents, and then writing it down, in what he called The Grandparent Archive. Oh, and offering them absinthe, as well. In another place, there was a girl being paid to lie in a coffin all night with the European Union flag draped over it, while in front of the coffin were photographic portraits of all the dictators of the last 150 years. There was a scary looking man just at the entrance to this exhibition, and I couldn't quite work out whether he was a diehard communist, or a diehard facist. So difficult to discern in a club environment.

I was overwhelmingly surprised at the drinks, where I paid only £1 for a half pint of lemonade, which, by London terms, in astonishing. Although, slight confusion when buying my first drink. The lady behind the bar had an accent, and there was loud music, so when I asked for a lemonade, she asked if I wanted vodka and lime. I didn't understand her, so just left it, and she proceeded to put vodka in. I swiftly corrected the error, and all was well. She was a little perplexed at the non-alcoholic nature of the request, but oh well.

We spent the majority of the night laughing at people who were playing with the shadows on the back projection of the aforementioned art installation. Drunk people and shadows an interesting mix, make.

So, in sum, a nice 'club', as long as you're not after dancing/pulling, and you are into bizarre art, political statements and scary underground vaults with no signal on your mobile.
Posted by David at 09:37 6 comments:

Had my last two scheduled lectures this morning, after which I filled in a feedback form, regarding this year, and then the overall three years. I still feel like a fresher, completely unprepared, scared to put my hand up, unsure of what people will think of me.

And yet, significantly, I'm not. I just underappreciate the skills that I have been provided with, and what people think of me, and the confidence God has placed in me. All I ask is that I rely on him more than I do myself.

This faff over expenses: it amuses me. While yes, I'm disappointed that our elected leaders (not my elected leaders, mind - missed out on the election by a matter of months, still a young'un) have fiddled, fixed and fabricated their expenses, it doesn't surprise me whatsoever. The most frustrating element is the fact that there will be 'big reforms'. Lead by who, you ask? The same MPs that claimed expenses. In the long term, I imagine that parliament will settle down into exactly the same rhythm under a different name, and no-one will be any the wiser.

My most sincere concern is that the large proportion of MPs that did claim their expenses are now going to hide behind the resignation of Michael Martin - if they can convince the public that he was to blame for the entire culture, then they've got off lightly. He, aside from being one of many who made claims, was not to blame for the way that the expenses were doled out, nor in the way that MPs claimed for them. However, I worry that his resignation will be brandished as a prophetic sign of movement, or change, or reform. It's not. It's the bullies pushing the most vunerable bully to the front of the crowd to take the proverbial slipper, in the hope that if he takes the hit, others will not have to.

One thing to bear in mind, however, is the complete and utter legality of the expenses system. In most ways, it was not the MPs fault that they could claim such ridiculous expenses. However, the fact that its faults were rarely pointed out does indict them, and as such, reform should take place.

Keen on buying a whole set of Biblical commentaries. Have just discovered that this could be upwards of £700 pounds. Less keen, now.
Posted by David at 11:41 2 comments:

The internet has lost its lustre. I come online. I check the intranet and my emails. I check the BBC News website. I check my blog/others in my blog roll. I check Twitter. I sometimes look at Facebook. But it's such a nothingness. It's so vacuous. Keeping in contact with people is great. But this endless dance of communication, keeping up with one another on a permanent basis - it just holds no enjoyment any longer. Perhaps it never did, but the novelty still endeared me to it all.

This doesn't mean I'll be giving it up, mind. Which, in itself, is even more frustrating. It's not to say I have nothing else to do, but more that the internet is no longer a new thing. Being permanently connected is not as fun as we once thought.

The irony of all this, of course, is that I'm telling you all (all being my 15 followers, and I shan't hold out hope that you'll all read it) via my blog, via the internet, keeping you up to date with my thoughts, just so you know what I think.

So, swine flu never really materialised, did it? I bet the Mail was gutted - less to panic about than they would have liked. I often wonder, after reading whatever ridiculous figures and comparisons tabloids came up with as to how many people might die in such a pandemic, that readers of them don't think, 'Hang on, a week ago I read an article that claimed up to 400,000 Britons could die. None have. Does this mean that the Mail is full of crap, and I should stop reading it?'

The media annoys me beyond belief. But without them, we're completely scuppered.

The other annoying piece of news this week is the whole farce about the Gurkhas. Why are we so willing to borrow our way out of an economic crisis of our own making, but - and at the risk of sounding Very Tabloidy - when it comes to our soldiers, do we not provide for them?

I cannot wait for the General Election.

In me news, this week has been pretty dire. A funeral, a dissertation, a lost football match, and revision looming. However, I soon will get my head out of my arse and consider others. Meanwhile, I feel horrible. Sorry.
Posted by David at 10:31 1 comment: 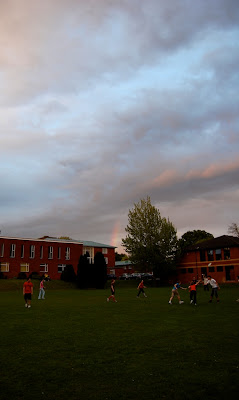 Frisbee has become the order of the summer. Which is always good. I've run out of creative things ideas to write about, so I thought I'd share some photos, instead.
Posted by David at 10:43 4 comments: